Russian satellite news agency published a video taken by Russian netizens on the 17th, showing a “stadium in southern Russia” The magical pink river & quoquo;, in addition to the special color, it is also stinking. 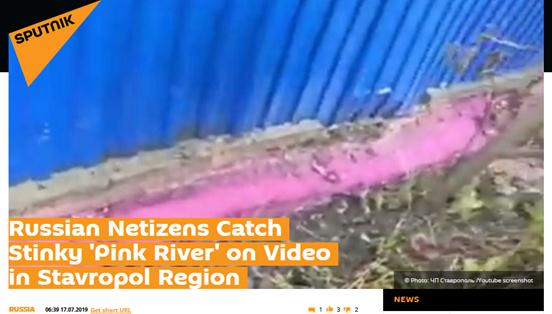 Why is this happening?

The Russian satellite news agency quoted local media as saying that this “river” strange color and pungent smell may be due to a sewage leak in a nearby factory.

According to reports, some locals said that the water suddenly turned pink because a nearby plastic factory dumped the waste. Some villagers reported that the factory had a disgusting smell.

The Russian satellite news agency said that the local government had launched an investigation into the incident and filed an administrative lawsuit for suspecting damage to the soil in the village. However, the report quoted local media as saying that the plastics factory has not yet issued an official statement.